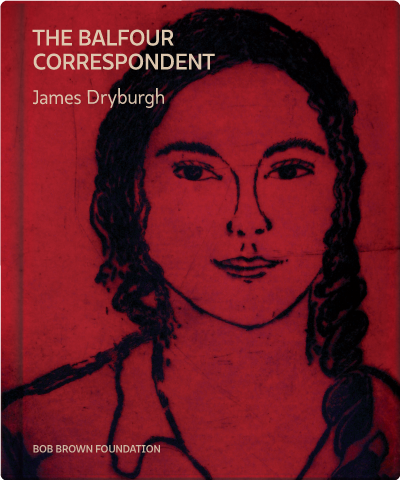 During 1912, fourteen-year old girl, Sylvia McArthur, writes to a weekly Tasmanian newspaper from Tasmania's wilds. Her letters from the doomed bush town of Balfour, in the lands we now think of as the Tarkine, have been forgotten for a century. James Dryburgh answers her letters, creating a strangely powerful dialogue across time and space and giving us a powerful sense of the forces that still do battle to shape our existence in this country, and on this earth.

From Tasmanian writer James Dryburgh, with a foreward by Bob Brown, all proceeds from this beautiful book will support Bob Brown Foundation campaigns to protect takayna / Tarkine.

With art from celebrated artists Barbie Kjar and Rachel Tribout and published by Bob Brown Foundation.

"In his compelling dialogue Dryburgh gives us a powerful sense of the forces that still do battle to shape our existence in this country, and on this earth.

The glimpses Sylvia gives us of her too-short life were framed by far vaster forces - of migration, colonisation and settlement, of mining interests and endeavours to exploit the wilderness, of nature itself that she encountered in its near-unsullied state along the Frankland River. Her life was shadowed, too, by the things she does not mention - violence against the land's original inhabitants, by the wars that were building far away.

In Dryburgh's sensitive engagement, this small female voice, so solitary that it sought connection through missives to a newspaper editor hundreds of miles away, reminds us that the settlers' place on this continent was never a given, and that sustainable existence on it requires acknowledgement of its fragility, and our own."

Caroline Brothers, author of The Memory Stones and Hinterland.

“A fourteen-year old girl writes to her local newspaper from Tasmania's wilds. Her letters from what we now think of as the Tarkine have gone ignored and been forgotten for a century. James Dryburgh recognizes that these letters are not just worth reading; they require answering, creating a strangely powerful dialogue across time and space.”

A spirited girl, a short, bright life, wonderfully unearthed from the mud and gleam of Tasmania’s history. As we still fight to liberate girls’ potentialities, James sends his fatherly admiration back in time. Unique, precious and deeply affecting.

“To span the baffle of time. To touch a lost life at once ordinary and extraordinary, across time’s opacity. That is the challenge James Dryburgh sets himself in this sensitive, loving book. Come with James into the sad, doomed bush town of Balfour. Here you will meet Sylvia and your life will shift.”

Hardcover, 76 pages, with letters, maps, illustrations and photographs from Balfour and takayna / Tarkine.

Save this product for later
Display prices in: AUD